Skip to main content
❮   Back to the Federal CX Projects

Meet Brad, a Veteran making a transition to civilian life and employment after serving 11 years in the Army. “My job was to go overseas and fight the bad guys” is how Brad sums up his 11 years in the Army. He enlisted at 20—right after high school—and separated at 31. Brad served two tours of duty in or near Iraq. He was struck twice by an IED and an Iraqi girl died in his arms. By the time Brad was 30, he’d had ten surgeries due to combat engagements.

Brad was given orders to leave the military due to these injuries. He had only two months’ notice—and in this time, he had to train his replacement, continue to guide his team, decide where to move with his wife and four daughters, and determine how to support them not only with a new job, but also with a new career path. Brad received three days of the Transition Assistance Program (TAP)—delivered on separate days by DOD, VA, and DOL, with a presentation from SBA. He was quickly shown hundreds of websites and more than 30 Federal programs. He had to “navigate the sea of support”— which “can actually feel like drowning.” Brad sent out 30 resumes and ended up without a job on day one of his post-military life. He was able to support his family with money from disability checks for a bit. He took a poorly paid job as a prison guard two hours away from where his family has relocated. He hates the job: it doesn’t pay well, he misses his family—the prison is now asking him to spend weekends there as well as weekdays—and his badly injured body is hurting more in this physically demanding environment.

In 2017, over 290,000 service members made this transition and taxpayers spend billions of dollars on programs supporting veterans employment. Veteran employment statistics have continued to improve, but there is more to the story.

Many veterans have jobs, but the jobs are low-wage and do not offer opportunities for advancement. The government programs that offer veterans support in their employment journey are not centralized or personalized to veterans’ individualized life circumstances. To better understand veterans’ day-to-day experiences finding work, we interviewed people whose backgrounds were similar to the majority of those now leaving the military and entering the labor market. That led us to focus on transitioned service members with some level of higher education coursework but no college degree who enlisted and served 10 years or fewer in the military. These veterans face a labor market that rewards applicants with higher education degrees and industry-specific certifications. If we can understand the pain points of this subgroup of veterans and help smooth their pathway towards meaningful work, we can make improvements that may benefit all veterans. 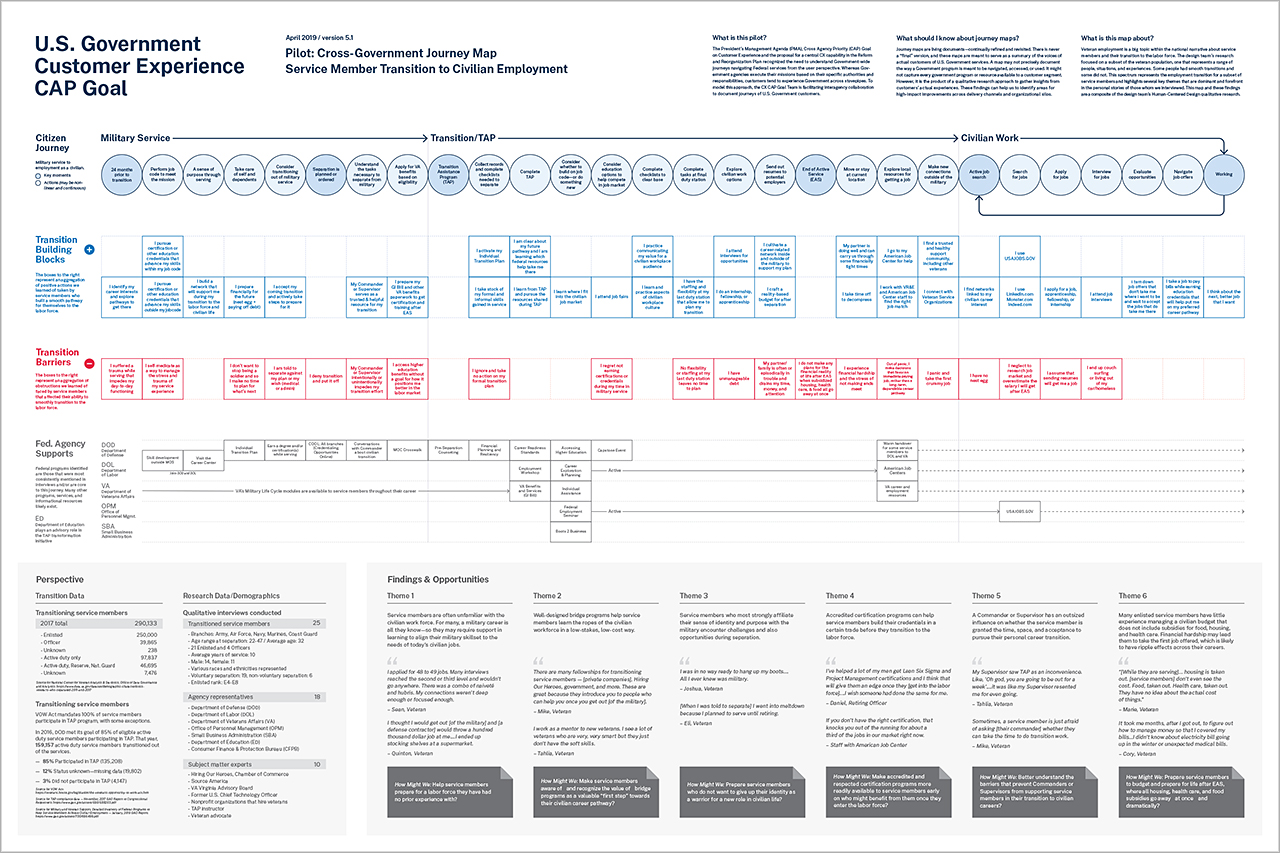 This journey map is a composite of the experiences of the people we spoke with, and shows the steps and support as they articulated them. This map has four sections:

What we learned from FY21 Q2 customer feedback data

What we have learned from Federal customers in FY20

Want to see your story on Performance.gov?