Performance.gov continues the tradition of highlighting functional fashion and how it helps agencies achieve their missions through our #FedFashionWeek campaign! Join us September 9-16 to meet fellow federal employees and learn how their functional fashion helps make an impact for the public every day.

We’ve scoured the fed fashion trends this season, and at the top of the charts is NSF-funded scientific research scuba diving! But what is a research scuba diver, and why would anyone leave Hawaii to brave the frigid waters of Antarctica? To answer this question, we spoke with research diver Aaron Toh to understand the importance of this work.

Aaron Toh is a Ph.D. student at the University of Hawai’i at Mānoa who left paradise to spend the last two years scuba diving in the world’s harshest conditions. Aaron deployed to McMurdo Station, Antarctica for a National Science Foundation (NSF)-funded scientific research project from 2019-2020 and again from 2021-2022 through the U.S. Antarctic Program.

Aaron, along with advisor Dr. Amy Moran and colleague Graham Lobert, formed a research team focusing on Antarctic invertebrates –meaning spineless creatures – and how they react to temperature and climate change scenarios. The slightest shift in climate change will have a significant impact, since these animals are sensitive to changes in their environment. Aaron and the team dove nearly twice a day, every day between October through December, and spent the rest of their time working hard in the research lab.

“It’s a really important question in the context of climate change because it’s already impacting Antarctica. The current postulation is a .5 – 1.7 degrees Celsius increase in surface water temperatures in the next hundred years.” -Aaron Toh

Why did the team choose to research invertebrates? Most of Antarctica’s animal population is not made up of penguins, as may be commonly thought, but rather algae, tiny fish, and smaller organisms, such as sea spiders. Aaron explained that we need to understand how this giant interconnected network will react to climate change. Because the organisms are most vulnerable when they are young, the team studied how baby sea spiders’ development would react to the increased temperatures they are already facing. 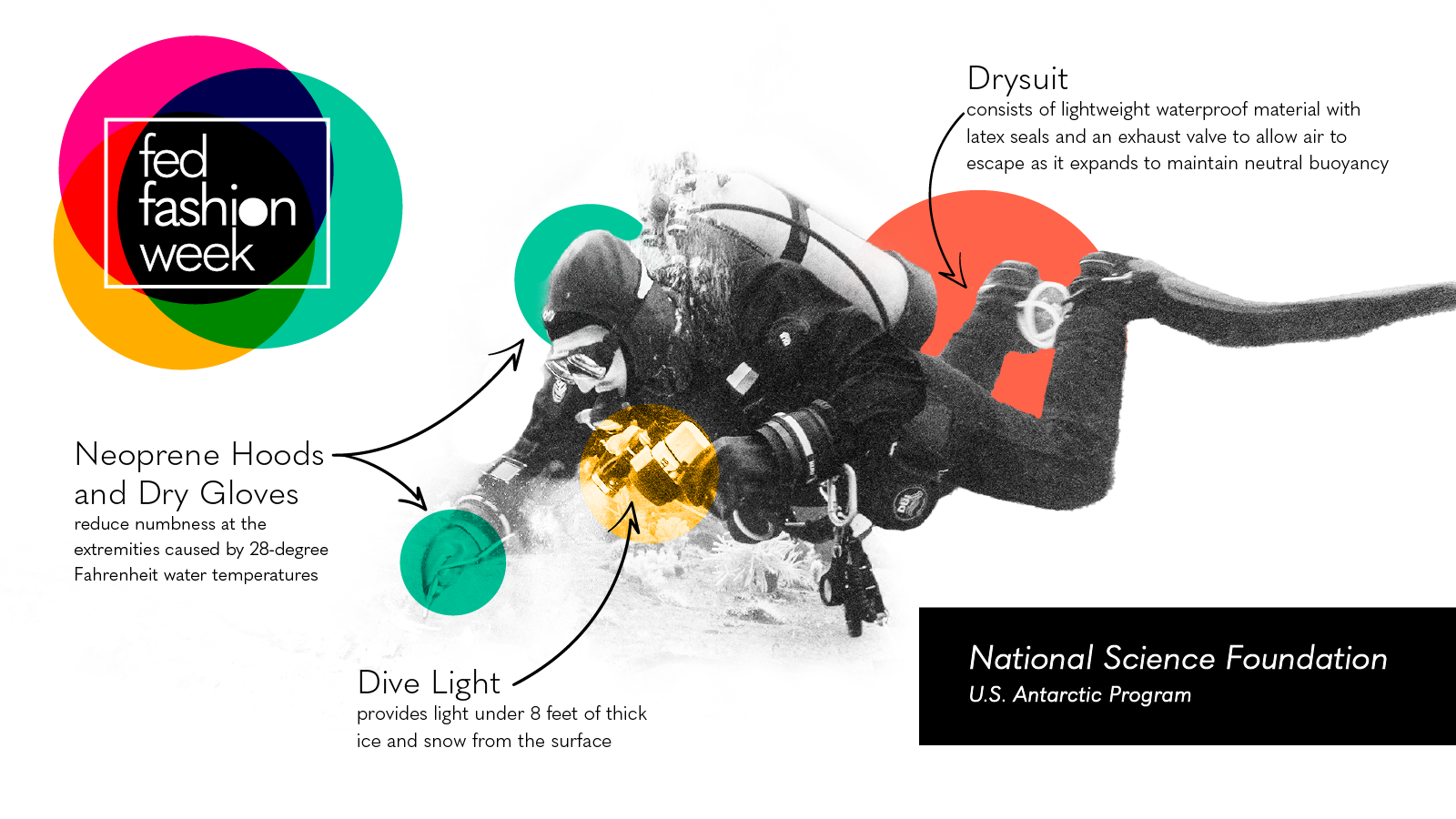 Aaron Toh collecting research samples at a depth of 70ft, under 8 feet of ice and snow in McMurdo Sound, Antarctica.

Before dipping a single flipper into icy waters, Aaron underwent specialized training. An Antarctic research diver’s most essential piece of equipment is their drysuit. Unlike wetsuits, drysuits keep divers warm by maintaining a layer of insulated air inside the suit, ensuring the water never touches the diver’s skin. “The objective is to keep the core of your body super warm,” Aaron explained. This requires extensive training to manage the drysuit airspace and regulate buoyancy. Warming layers and a battery-powered thermal vest can also be worn under the drysuit for additional warmth – and to complete their look.

The life of a research diver isn’t all glamorous. The water temperature is about -28 degrees Fahrenheit (or -1.8 degrees Celsius) and can become uncomfortably cold, even with all the equipment, after about 40 minutes of diving. Research divers also use a string of lights, called a downline, to help guide them back to the surface. 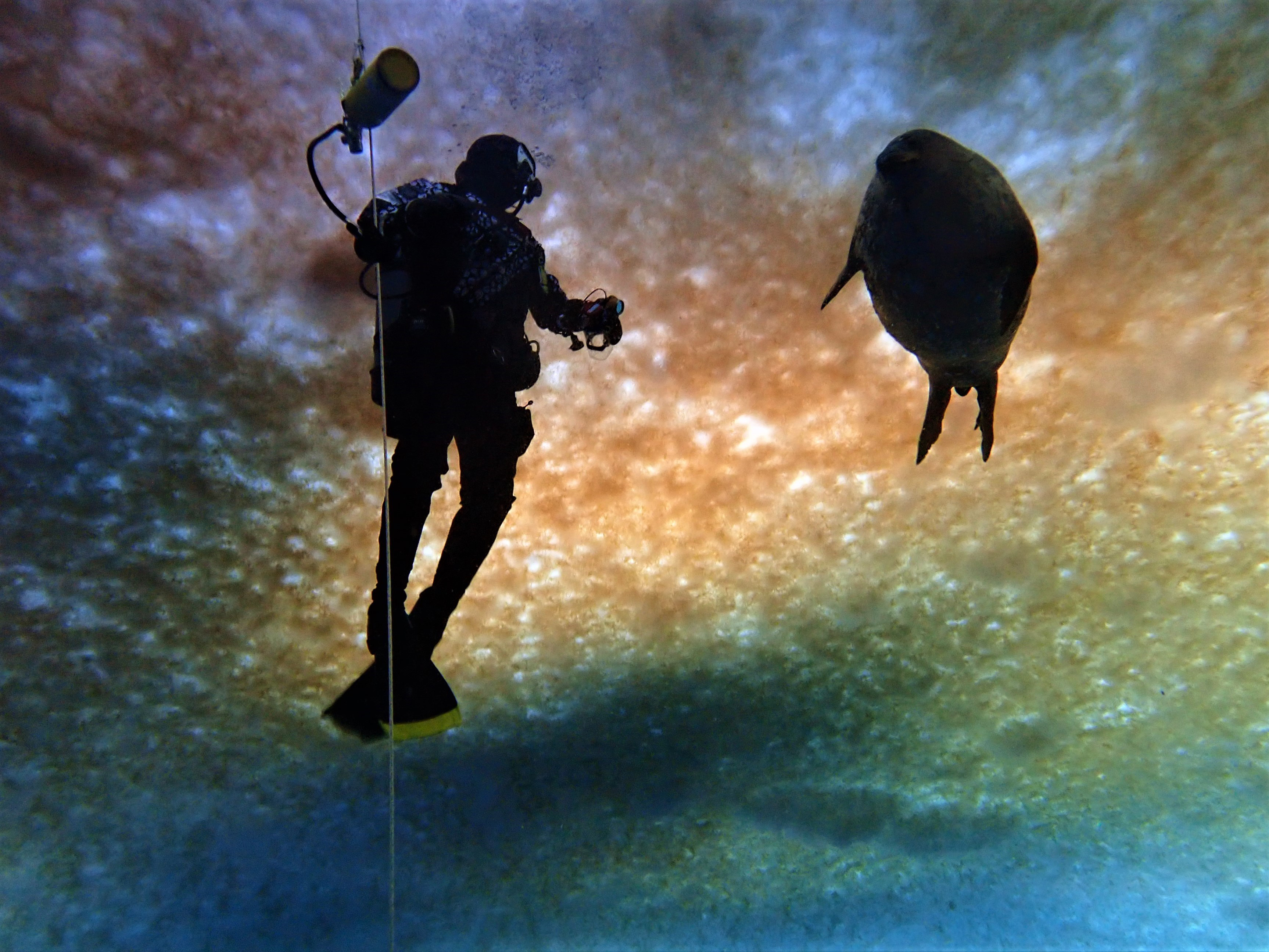 Although it’s hard to beat some of the most jaw-dropping aesthetics of untouched biodiversity, it’s all about the research for Aaron, who says Antarctica is an amazing place for scientists because of the incredible amount of research opportunities. Aaron added, “We’re really thankful to NSF and all the funding sources for putting together the logistics of getting us down there. It takes a huge village to make this project happen.”

Want to learn more about Aaron and the team’s research on marine animals that live in the Southern Ocean surrounding the continent of Antarctica? Check out their website for behind-the-scenes photos and links of Aaron in action! For more information, visit the NSF United States Antarctic Program website.

For more than 60 years, the National Science Foundation has coordinated and managed the U.S. scientific presence in Antarctica. More than 3,000 Americans are involved in Antarctic science each year, and NSF maintains three year-round research stations.

We invite you to follow along with us on Performance.gov

Updated quarterly with progress on agency and PMA priorities and strategies.